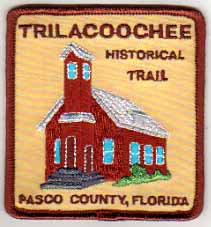 (WARNING - This trail may pass through one or more neighborhoods which, although full of history, may now be unsafe for individuals on foot, or which may make you feel unsafe there. Hikers have been approached by individuals who have asked for handouts or who have inquired (not always in a friendly manner) why the hikers are in their neighborhood. Drugs and other inappropriate items have been found by hikers in some neighborhoods. It is suggested that you drive the hike routes first to see if you will feel comfortable walking them and, if you don't think it's a good place for you walk, you might want to consider (1) traveling with a large group, (2) doing the route on bicycles, or (3) choosing another hike route. The degree of comfort will vary with the individual and with the time and season of the hike, so you need to make the determination using your best judgment. If you hike the trail, you accept all risks involved.)

North side of Trilby Rd., between the Withlacoochee State Trail and Old Trilby Rd.

The first post office was established for this community in 1885, when it was called Macon and this was still Hernando County. Prior to that, it was known as the McLeod Settlement, which dated back to the 1870s.

When three railroads converged in this town in 1896, it was renamed Trilby. Platted streets were named after characters in the the novel Trilby, written by George DuMaurier.

(Continue east on Trilby Rd. to the intersection with Old Trilby Rd.)(0.1)

This congregation organized in 1897 with 12 charter members under the leadership of Rev. T.H. Sistrunk. This wood frame building was erected in 1898 near the railroad coal chute, and was moved to this spot in about 1920. Although there was a remodeling in 1978, the building retains much of its original appearance, and still uses the original pulpit made by hand by John Spinks.

In 1980, an oriel-type alcove was removed from the rear of the church and replaced by a two-story concrete block structure. The older section has been used for Sunday school classes, music fests, and youth meetings.

The church has a Victorian Revival style of architecture, and features bevel-edged siding and the main entrance through the tower.

The original Stephens Grocery was located on the nearby Trilby Pond, until it burned down in May of 1925. This tin-roofed structure was soon built to replace it. In the rear of the store, which continued in business until the late 1940s, were living quarters.

To the north were the Bankston residence and Bradham's Dry Goods Store.

West side of Old Trilby Rd., between Trilby Rd. and Wooten Dr.

In the 1920s, this was the main business district of Trilby. Heading down the road were located:
The Post Office
An alley going down to Malaria Lake (Railroad Pond)
Mr. Edward's Redfront General Merchandise Store, which had the only gas pump in town, and which also sold coffins in the days before embalming
Dick Pitt's Meat Market
Edgar Wade's Drug Store
A cafe
Vernon Hilliard's Barber Shop, owned by a railroad worker
Tom Blitch's Drug-Sundries Store, with a soda fountain
A cleaning establishment
Bankston's Grocery
Matt Lake's colored rooming house

All of the above except for Blitch's were up on pilings.

(Continue south and west on Old Trilby Rd., then walk north on the Withlacoochee State Trail 600 feet past the sign with the trail map and look to the west.)(1.1)

East side of Trilby Cut-Off Rd., between Trilby Rd. and Polite St.

In 1887, narrow-gauge track was laid and a wooden depot was built for Peter Demens' Orange Belt Railway, which passed through here on the way from Sanford to St. Petersburg. Henry Plant bought it in 1895, converted it to standard gauge, and sold the railroad to the Atlantic Coast Line in 1902.

The original depot was then torn down and replaced with a new one in 1927. The Atlantic Coast Line merged in 1967 with the Seaboard Air Line Railroad, forming the Seaboard Coast Line. Rail service to Trilby ceased in 1976.

The depot was taken by trailer to the Pioneer Florida Museum in Dade City in 1978, and is on display with a 35-ton steam locomotive used by the Cummer Sons Cypress Company.

(Continue north 500 feet on the Withlacoochee State Trail and look to the east.)(1.2)

East side of the Withlacoochee State Trail, between Old Trilby and Trilby Rds.

This structure was built in Twin Lakes in January of 1894 to be the headquarters of Twin Lakes Lodge #141. A horse and rollers were used to move it here in about 1902, and the name was changed to Trilby Masonic Lodge #141. The lodge used the upstairs, and downstairs was a store and living area. Later, it ceased being used by the lodge and was renovated for use as a residence.

Heading north from here was a printing shop and the two-story State Bank of Trilby. The two-story red brick bank building was built here in 1918 with living quarters upstairs. After the central business district burned down in 1925, a room in the rear became the post office. E.M. Dixon dismantled the building and used many of the bricks to erect a house on River Rd. near Dade City, and some were used to construct a Sinclair gas station, also in Dade City.

(Continue north on the Withlacoochee State Trail, then walk west on Trilby Rd. and north 525 feet on Beaver Rd.)(1.4)

East side of Beaver Rd., north of Trilby Rd.

In 1907, Charles Allen Cannon built a typical Florida "cracker" house here, so named because of the sound of the whips used by early cattle-raising settlers. It was the residence of himself and his wife, Bessie. The lumber was prepared west of town for the construction of the four-room hipped-roof house, attached to a kitchen and dining room by an open breezeway.

Next to the residence was a mill house consisting of one large room in which corn was ground with a gasoline-powered grinder. It and the Cannon home were torn down in 1974.

West side of Robbins Rd., between Trilby Rd. and Holloman St.

This congregation was founded in 1912 by Rev. A. Bradly and its present sanctuary was constructed in 1982.

In 1910, school classes were held in two wooden stores here. After they burned down, they were replaced with a brick schoolhouse. It also burned. This was later the site of a garden planted by Earl Tyler, which he irrigated with the old schoolhouse well.

(Cross US 301 and walk east on Cummer Rd., north on Patti Ln. into the allotment (subdivision), south on the first street on your right, and east on Story Dr. (which runs parallel to the boundary fence) to the intersection with Bower Ave. and look to the east.)(4.5)

East side of Bower Ave., between Story Dr. and Chapman St.

In 1922, the mill of the Cummer Sons Cypress Company was built here on 100 acres. All that remains are some sheds and portions of the mill, where there used to be a large open-air lumber yard, a large cypress mill, a crate mill for constructing vegetable boxes bound by wire, and a small sawmill. To support the operation were a company store, a water tank, and housing for several hundred employees.

In 1959, the mill operation was terminated. The company sold some of the homes to the workers, and the remainder, including most of the shacks for the black workers, was demolished.

(Walk north on Bower Ave. to the intersection with Chapman St.)(4.7)

From the time this company store was built in about 1922, workers could come here to purchase clothing, hardware, groceries, and other items. They could charge their purchases with coupons, and the amount they bought would be taken out of their pay.

Dr. W.H. Walters was the last company doctor, who utilized a suite of rooms on the north end of this building. Even after the mill closed in 1959, Dr. Walters kept his office here until he died in 1982.

(Continue north on Bower Ave., then walk east on Coit Rd. and north on Franklin St. to the intersection with CR 575.)(5.1)

Intersection of CR 575 and Franklin St.

During the wars with the Seminoles (mostly during the 1830s), there were settlers here. Development as a community increased with the coming of the railroads and a post office was opened in 1888 with William Acosta as its postmaster. The area was hit hard by the freezes of 1894 and 1895, but development again picked up when Cummer Sons Cypress Company created a company town in 1922. The area went into another decline when the mill closed in 1959.

A building was erected here by Charles C. Smith, who had served as the paymaster in Cedar Key for the Cummer Sons Cypress Company. After he left that company in 1927, he came here and built this store with living quarters in the back. He and his wife, Elizabeth, sold dry goods, hardware, gasoline, and notions.

West side of CR 575, between Sanderson Rd. and the railroad tracks

During the 1950s, located here were the office of Judge O'Berry, a justice of the peace; May's, selling hardware, dry goods, and groceries, run by Clark and Rosalie May; and O'Quinn's grocery store.

West side of CR 575, between Sanderson Rd. and the railroad tracks

In 1922, the company located in a two-story building here commenced the business of washing and pressing clothing. The building had a wood-fired boiler, which later was modified to allow the burning of oil. The company picked up and delivered the laundry weekly.

In the late 1930s, Mr. Hartley was killed in an accident in front of this store, involving a train and a car. After that, the business closed.

East side of US 301 (Fort King Rd.) at the south bank of the crossing of the Withlacoochee River

Maj. Francis Langhorne Dade and 111 men were marching from Fort Brooke (Tampa) to Fort King (Ocala) on December 28, 1835, when they were attacked by Indians led by Ote Emathla (Jumper) and 180 of his men. Dade and 106 of his men were killed. The battle took place about 15 miles north of here near what is now Bushnell. In addition to the factor of surprise, what increased the death toll was the killing of the wounded afterwards by about 50 of the Indians' slaves.

This began the Second Seminole War, which lasted for seven years and resulted in most of the Indians in Florida either being killed or shipped west of the Mississippi River.

After the massacre, towns and counties throughout the U.S. changed their names to honor the memory of Maj. Dade. In 1837, a fort was established a little north of here by Gen. Thomas Jessup on his march from Fort King to Fort Brooke, to serve as a supply post. A few months later, the fort was abandoned.

The name of the river, "Withlacoochee", is a Creek word, meaning:
We=water
Thlako=big
Che=little, or "little big water".

This church was first occupied by the Trilacoocheee Assembly of God, which was founded in 1934 and built a sanctuary in 1947 in memory of Mr. and Mrs. Philip C. Mickler and Rev. H.D. Brown. In about 2000, it became the home of New Life Assembly.